Jason Mante is an around the clock creative. From his job as Head of Culture at the viral video app, Vine, to his own personal pursuits in music, art and photography, Mante has a strong passion for creation. It’s that creative drive that makes him the perfect resident of Hell’s Kitchen, a neighborhood that thrives on a deep history of cultural practice.

Choosing the neighborhood for its centrality—being close to his work and the sights, sounds and tastes of Manhattan— Mante has fallen in love with the neighborhood, which he uses as both inspiration for and subject of his video and photo shoots.

A typical day in the life of Jason Mante involves him going to work at the Vine’s offices, before coming home to work on his self-proclaimed “groovy electronic music”, which he self-publishes online. With a new record release on the horizon, Mante spoke to us about Hell’s Kitchen and the everyday inspirations of the neighborhood. 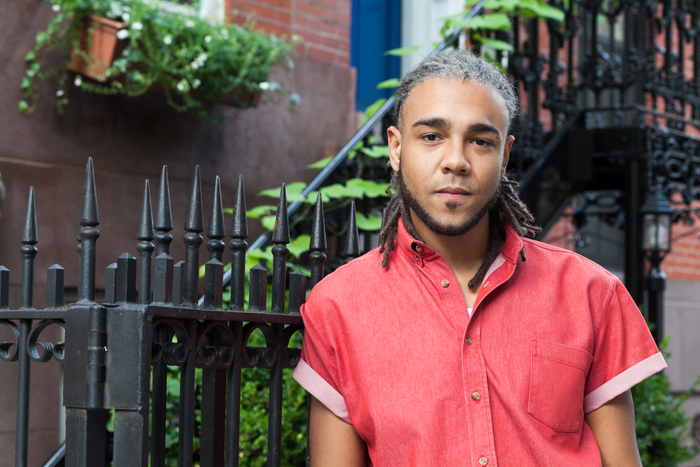 What first attracted you to the Hell’s Kitchen area?

Mostly how central it is, but also just having a really great vibe. I love the particular area that I’m in because it’s so close to so many of the train stops and near the water, so there’s a lot of facets.

What ‘hidden gem’ have you found?

Nothing specifically, I just really like all the little streets and nooks and crannies where I can take photos.

Where is your favorite place to eat?

There’s this Mexican place called Patron Mexican Grill, which is pretty good. My favorite thing though is the taco chip and strawberry pancakes at Gaucho Steak Co.

What’s unique about the tech/work scene in Hell’s Kitchen?

It’s interesting, and this applies to New York in general, but in particularly in Hell’s Kitchen it’s just such a mix of people who are working in different industries. The neighbors here are pretty awesome.

Where’s the best place for after work happy hour?

If I’m ever looking for a place to chill out after work I normally just walk a couple of blocks over to the pier and hang out by the water.

What would you go out and Vine from Hell’s Kitchen?

I’ve had some good results shooting video on the rooftop of the building. I like how dense it is. A lot of times I find in Manhattan the rooftops have quite a vast view with lots of space, but the building I’m in is kind of short and so I really like how empty it is. You have a lookout but it’s really congested. It’s really interesting to me from that perspective.